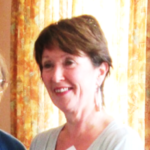 It was 1993 when Mary met Fr. Fred Fox on the first Bio-Testing and Therapy course to be held in the North of Ireland – although She wasn’t aware of that then!!!! She was teaching full-time and had just qualified as a Counselling Therapist.

On that week long course in 1993, She watched Fred work with people and listened to their stories – She was amazed. Mary was there, simply out of curiosity but She quickly realised this was a simple, inexpensive and non-invasive method in keeping herself and her children physically healthy.  Since then She have extensively used Fr. Fred’s Bach Flower Method in her Counselling Therapy.

In 1994 and 1995, She completed more advanced training with Fred and from then She has continued her training in Complementary Healing including many Post-Graduate Courses promoted by BTTI, She has also organized and taught many self-help workshops in County Derry.

Twenty two years later, I have qualified as a BTTI  facilitator!! This was never her intention!!
But meeting Freddie, as he affectionately became known, empowered her for the rest of her life. His passion in developing simple methods of healing continues to encourage her to teach his Therapy.
What a gift to all of us!

Mary researched Freddie’s development of homeopathy in his therapy   Read her paper….